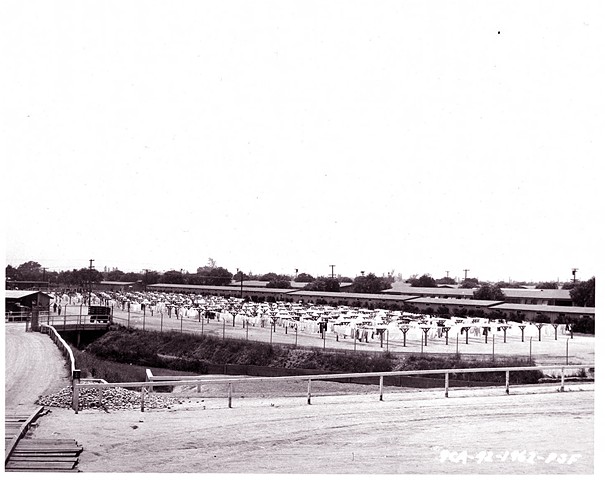 "Located at the Santa Anita Racetrack, approximately 13 miles northeast of downtown Los Angeles, this " assembly center " was occupied from March 27 until October 27, 1942, a total of 215 days. Santa Anita was the largest and the longest-occupied of the temporary WCCA camps. Its peak population was 18,719. Over 8,500 Japanese Americans lived in converted horse stalls at the racetrack. It was the only "assembly center" to run a camouflage net factory, operated under military contract. The majority of Santa Anita's inmates were shipped to Heart Mountain , Rohwer , Granada , and Jerome." - Densho.org archives

From grandma May: "We got to Santa Anita Horse Race Track. Check in, given our unit to live in. It was the horse stalls. Horse hair was hanging on the wall. The wall boards were rough. The horse smell was bad. It had been previously cleaned but the floor was rough too and mushrooms were growing. It was not a healthy odor."

"Laundry - hang them to dry in the Santa Anita Park Parking lot or in your room. Laundry stationary tub hot and cold water. We bathed our little ones in the tub."