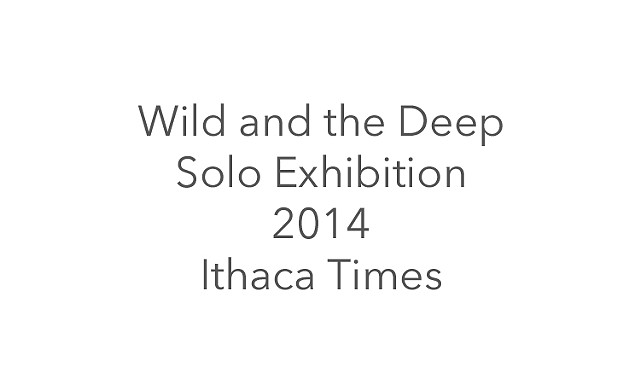 A Californian turned Ithacan, Suzanne Onodera is one of our best painters. Her oils, often large, echo the romantic and tonalist painters of the 19th century in pushing landscape away from concrete depiction and toward abstraction. The word that usually comes up in discussing her work is “atmospheric.” Rich explorations of texture as form, she builds up layers of thin and sometimes-thickened color—stains, fogs, and accenting brushstrokes—that evoke places imagined or seen through the veil of memory.

In addition to the Corners Gallery in Ithaca, Onodera is represented by galleries in California, Arizona, and Vermont. The artist had her first local solo show in 2012 at the Community Arts Partnership’s ArtSpace. She has been in the occasional local group show: most memorably, “Landscape and Memory” in 2010, curated by local artist Tim Merrick (now her husband) for the Tompkins Country Public Library. Last year, she was part of “Galerie Magnifique,” a pop-up exhibition curated by Corners owner Ariel Bullion Ecklund in a temporary space near her Cayuga Heights frame-shop and gallery. Still, my sense is that she has yet to fully “arrive” as a local artist—that is, until now.

Up this month (through Oct. 4) in Corners’ recently renovated and expanded space, Onodera’s solo exhibition “The Wild and the Deep” is imposingly rich in its collective grandeur. The show upholds the gallery’s emerging reputation for high standards in showing both local and non-local artists. The work includes oils on canvas, paper, and wood panel.

Although the show has been several years in the planning, all of the work was finished in 2014. “It takes me so long to make a painting,” Onodera explained to me before her recent opening. “Although I’m working on several at once, it takes me a long time to get to a point where it’s done. So, knowing that, three years is about right, even though the last eight months, you’re just like every day in the studio. And then it totally changes. There’s a certain point where you’re just like … everything that you did last year totally doesn’t fit into the show.”

The Corners’ front room does multiple duties as a display and consultation space for other gallery artists and for the framing business. It holds a scattering of Onodera’s smaller pieces.

A corner—just to your right as you step in—holds two small but striking paintings. An upswept gray cloud and hefty turquoise sea spotted with black enact a brooding drama in the square-shaped Ocean Deep. Unusual for this show in its color and skinny upright format, Waking Tiepolo evokes the Italian Rococo artist’s gravity-defying multi-figure paintings in its delicate tones—red-purple, fleshy pale pink, baby blue—and roiling brushwork.

A row of upright pieces on unframed sheets of paper have been clipped to a prominent wall. (There is a contemporary vogue for informal displays of artwork.) Beneath the Shadow of Night and The Pull of Oblivion pull their painterly theatrics around hazily lit central voids. The Wild Cry of Involuntary Things is particularly gorgeous with its agitated brushiness and fiery cloudscape.

Recently acquired and renovated as a dedicated gallery over this past winter, the Corners’ back room holds the bulk and the focus of Onodera’s show. It’s an impressive selection. (All pieces are on canvas unless otherwise mentioned.)

Onodera is deeply invested in her signature approach, one that conceals its exploratory range behind a striking consistency. In this regard, it is welcome to see three smaller Koi paintings: scenes of pink-orange carp immersed in shadowy waters, swimming eloquently in both unison and counterpoint. (Koi #2 appears in stately black frame; oddly everything else here is unframed.)

I asked Onodera if these paintings—with their echoes of the late 19th century European craze for japonisme—were intended to recall her own Japanese heritage. Unsure, she explained simply that she had been looking through photographs of Japanese gardens and had become fascinated by “the little fishies.”

“Koi are magical,” she said. “I love the color. I was drawn to them mostly, originally for their color…you know, how they emerge out of the dark.” Indeed, these lively creatures seem to emerge—to move or even grow—from the color, from the material of the paint.

An animating tension between hazy, layered tints of color—reminiscent of the late 19th century tonalist painters like James Whistler and George Inness—and areas where the trace of her brush is more pronounced characterizes Onodera’s work. You can feel the difference: the paradoxically diffuse but weighty quality of her skies and voids versus the palpably gestural movement and tension that traces from her hand. Her laborious building up of these qualities results in work that has a symphonic depth and complexity.

According to Onodera, her work has changed in the last year. “The markmaking is more gestural,” she explained to me—“I think it’s an evolution.” Indeed, this is particularly evident in several pieces here—most strikingly so in a pair of large canvases that hint at the abstract expressionism of artists such as Joan Mitchell and Philip Guston.

Another large piece, On the Deluge and its Depiction pushes the expressionism to a point of willful coarseness that challenges the eloquence and facility that I associate with Onodera’s style. It is not an entirely satisfying piece but it is an interesting departure. The piece has an unexpected symmetry: a tentative clearing in the sky meets a what might be a river, forming a rightward pointing “V” converging where one might expect to find a horizon line.

Certain Refuge pairs a particularly pale, hazy sky—it is almost uncomfortable to look at—with a landscape of pale greens, painted in demonstrative patches of relatively thick paint. A river curls from the foreground, leading the viewer into the distance. It seems to absorb the color and light of the sky but also to hold it off, as if to keep it from smothering everything.

In the Low Country we glimpse rusty clouds sweeping down against pale purple-blue sky—towards what might be a lagoon, ghostly olive green water surrounded by shadowed red-brown earth.

Although a narrow gap separates the two adjacent panels in From the Fire, the scene is otherwise continuous: smeary red-purple clouds held up by pale blue sky and a earthscape of amber scorched with purple-black. Onodera’s world-view is so soft; the jolt of the straight edges adds something to the work. A relatively straight-ahead landscape, Approaching Thunder, shows a vaguely pyramid-like upswept cloud, seemingly pulling away from the dark earth below. Many of Onodera’s pieces conflate sky and earth, above and below—but not so here.

A visit to view “The Wild and the Deep” is like taking part in a rich but carefully proportioned meal—filled with a fiercely intelligent sensuality and well-conceived variety. It is a must see for those with a serious interest in painting.

Corners Gallery has had a string of fine exhibitions this year. Not only that but Ecklund’s discernment in representing and selling local and non-local artists is most impressive. (Onodera, with her gallery representations in several states, is in a way both.) The Ithaca-area roster also features painters Barbara Page and Stan Taft, as well as mixed media artists Minna Resnick and Ruth Sproul, both known for their printmaking. From around the country, the list includes the surrealist painter-collagist John McLaughlin, experimental photographer Elise Nicol, and the scientifically inspired printmaker Rosalyn Richards—all of them among the more interesting artists to show their work in Ithaca in recent years. - Arthur Whitman